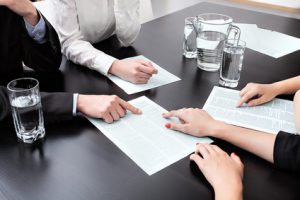 It used to be that when you had a serious, law-worthy dispute with a spouse, neighbor, or anyone else you headed to court. Everyone fought like cats and dogs. Everyone got angry and stayed that way for years. Everyone hated the whole thing, but everyone gritted their teeth and put up with it.

Choosing the route of collaborative law in Maryland, means choosing a better way to resolve many disputes. Not in a courtroom, but around a table, discussing the issues and hammering out an agreement acceptable to both parties — an agreement that often costs less, takes less time, and generates less friction than going the traditional route.

An adversarial legal action, in which two parties lock horns and wrestle in and out of court until one is declared the “winner,” costs money. The harder the two parties fight, the more the contest costs. Not a pleasant way to spend a few months (or years) and many thousands of dollars, but until recently, this was the only choice anyone had.

But now there’s collaborative law, in which two parties with differing interests work together, with the help of a small team of professionals, to craft a compromise that works for both. And that compromise can be dramatically less expensive to achieve. Consider a collaborative divorce: what could have cost $20,000 (or more) often can be had for $3,000 (or less). Why so much cheaper? There are a number of factors, but one of the biggest is time savings, up next.

Legal professionals bill by the hour. So do financial advisors, counselors, and other professionals who typically assist during both traditional and collaborative disputes. But in collaborative law, all parties have agreed to work together in the spirit of compromise, rather than go to the mat on every detail, which can eat up lots of time in simply waiting for responses from either side.

When you choose the collaborative route, everyone agrees on suitable meeting times, and often, at least in relatively simple cases, disputes can be ironed out in just a few sessions. As you can imagine, this approach typically saves considerable time, which can go a long way toward helping you stay sane during the process.

The only people who enjoy time in a courtroom are attorneys and judges. While parties in a collaborative law dispute agree that they’ll go the traditional route, complete with courtroom fun, if an agreement can’t be reached, it doesn’t happen that often. Part of the reason is that the whole mindset is different: instead of squaring off like boxers, the parties in a collaborative dispute come to the table expecting to work together toward a mutually beneficial solution.

It’s not all rainbows and butterflies, but collaborative law is very often less taxing on the emotions — and sanity — of the parties involved. Not only does that make for a more agreeable atmosphere during the process, but it may also save acrimony and hard feelings that persist for years afterward.

Is Collaborative Law Right for You?

If you and the other party in a dispute can reasonably expect to be able to work together in a more or less civil fashion, at least for a limited time, consider resolving your differences with collaborative law. Apart from the money and time you’ll save, chances are good that you’ll both feel better about the outcome — and each other.